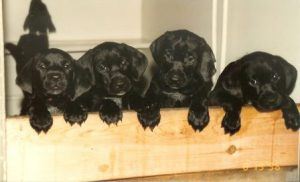 Our puppy Suki was about 3 months when my ex and I visited a friend’s house. When we held her for a nail trim, she squirmed and my ex cut the quick. As Suki scampered off I watched in horror as drops of blood smeared across our friend’s carpet. Ashamedly, I lost it. I began crying hysterically and uncontrollably. I was certain his carelessness was the direct cause of me losing an arm in a past life (you think I am kidding here?).

Needless perhaps to say, as a result of my hysteria, Suki had grown to seriously dislike nail trimming, to the point of sheer panic. She was so freaked about the whole nail incident, combined with the “docking” of her tail by the vet before I got her, (that’s another story) that she would hide under the bed at the mere glimpse of any metal implement.

The next time we attempted to trim her nails Suki was about one year old and 75 lbs. of pure muscle, her nails were a definite problem. Seeing the growing terror in her eyes as we held her down, I asked my ex-hubby to meditate for a moment and ask if pinning her was the right thing to do. We both got “no”. So I told Suki we wouldn’t force her, but she had to somehow manage her nails so that no one got hurt. I commanded the now-famous words: “Whoever you are in this doggie body, if this is not something we need to go through, then manifest shorter nails!”

Overnight her nails were all the perfect length—smooth, no rough edges!” I almost didn’t believe my eyes, but I had 2 other witnesses living in the house who verified this. (PS for all of you thinking that she must have filed them down on some concrete—we live in FL on sand roads and she never left the carpeted house; but you are entitled to cling to your logical explanations).

While I had read stories of great beings and sages morphing their physical structure to become taller, thinner, shorter, etc. I had never personally witnessed this ability to shapeshift. And I don’t know exactly what made me think to call on Suki to access that great siddhi, or spiritual power, at that moment. Except that I had seen and felt her extraordinary Presence many times, and I trusted that we were not supposed to force her, so I called on the only other way I could think of—a miracle.

For over 8 years Suki manifested short nails in this magical way. I had to bring her attention to it perhaps 4 more times when I noticed they were getting long. I would just get her attention, remind her of that original conversation, and say “whoever you are in that doggie body, if you don’t need to go through a physical nail trim, then handle it yourself and create short nails”. Overnight, they would always be the perfect length again.

However this all changed when she was 8-1/2 years old. I noticed her nails were getting long again, and I had a sinking feeling it was time to face the nail trim demon. It became clear to me that Suki had released her fear, but I still had trepidation about getting a bleeder. I had to go buy a trimmer as I didn’t even own one anymore.

One day, I was very serene and felt bold enough to attempt a trim again. I had tried to sneak up on her before, and it always backfired and I lost a lot of trust with her. So I knew I had to come straight on and show her what I was doing, and manage my anxiety first. That was key—to manage my emotions so as not to trigger her fear.

I was very empty and able to approach her with the trimmers—a miracle in itself. She watched carefully but didn’t bolt like usual. When I got them around her nail, and was ready to press the blade down, I had a thought “wonder if I am doing this right” and my stomach tightened. That was all Suki needed to bolt under the bed. Yet the sequence was now crystal clear to me…a worry thought, a feeling of incompetence and concern of hurting her –and she vanished! It was MY anxiety causing the panic. She was totally reading me for her reaction now—when I was calm and empty she was fine…as soon as I contracted, she read “Not SAFE” and bolted.

It took me another two weeks to get that deeply calm again. Meanwhile I practiced cutting tree branches to build my confidence about using the nail trimmer. I also picked up the nail trimmer many times in sight of her and left it out so she could see. When I felt very comfortable I approached her and she let me place it on her toenail without moving, and I successfully cut one nail! The loud sound of the cutting unnerved her however and she tensed, but I quickly put the trimmer down before she bolted. I realized I had built our whole relationship on respect and trust, and I could no longer apply control and force with her.

I figured it was more important for both of us to maintain this new trust, so I decided to wait and only cut when we both were relaxed, even if it took me a month to trim all her nails. And it took more than that.

Suki left her body that year, but by the time she transitioned I had been able to maintain my poise, check my energy and quit when she got afraid; in this way I accomplished cutting all her nails finally! Even though she obviously had the amazing ability to shapehift her nails shorter, she never failed to be the Teacher and help me overcome my obstacles. We both walked through our fear that year.