Listen to the audio version of this blog below.

My husband Kumara fell recently and broke two ribs.  On top of the excruciating pain, the doctor cautioned since the breaks were not clean, there was a continued risk of puncturing a lung or other organ. 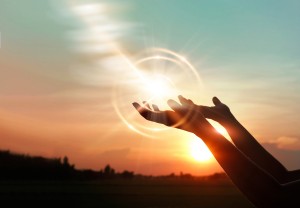 We were told it takes 6 weeks for the bones to heal, and many well-meaning friends suggested it took at least that long from their personal experiences.

He is a super strong guy, and frankly I have never seen him in this level of pain. He could hardly do anything for himself, as every move was agonizing. Not to mention he had important work projects lined up, plus an assistant he didn’t want to lose by not providing him work. So of course we were hoping for a shortened healing time, but even I was very pleased when, only 4 1/2 days later, he shared this wonderful experience:

“During the Ascended Master meditation, when we put out our hands to connect with Divine Mother, I instantly felt a presence touching my hands, and then a powerful flow of what I can only say was LOVE, like sitting in a spring flooding me with waves of intense loving energy, filling me up. Then I noticed that I felt my ribs mending or knitting together, feeling much more stable. The pain was way less as well, and things I couldn’t do in the morning, like bend to the floor, suddenly I could do them. I was waaaaaay more flexible after that meditation.”

When I asked him to describe the feeling in more detail, which he called Love, he said it encompassed everything, including peace, fullness, contentment, ease, joy and even bliss. Only 7 days after the injury, he is back to work, doing very physically taxing home renovation. Though it is not fully mended, it is way ahead of the anticipated time to be fully functional, gratefully.

While broken bones healing like this may sound astounding to some, even impossible (a family member flat out called it BS), this is not a new phenomenon.

While I never know when, or even if, accelerated healing will arise out of these expanded consciousness states, I am certainly no stranger to the possibilities of even spontaneous healing as a sort of by-product of the higher frequencies that occur in deep meditative states, and with energy healing practices like Reiki.

More than 23 years ago, my ex fell off a ladder in the basement, and I heard the crack of bone. His ankle was no longer straight and he was clearly hurt badly. I immediately applied Reiki for a few minutes to help manage the pain, and when he could bear it slightly better I drove to the hospital. It was in fact a broken ankle, which they plastered with a cast and again said it would be 6 weeks, AND he must stay off of it and not work or it would take even longer. Well he rested no more than a day and went back to climbing on ladders to finish  painting a house with his cast, as we really needed the money.

Every night, it was so swollen from working on it all day, that he swore he would rip off the cast. He was beyond agitated and uncomfortable, and after doing Reiki on it for about a half hour each evening was the only way he could calm down and get some sleep.

After only 3 weeks, he got his cast wet while working and had to go back to the hospital to get a new one put on. First they did an x-ray, and came back with the great news that the bone had healed completely and he didn’t need another cast! Not only did it heal in half the normal time, but he really pushed the limits by working in construction daily without resting it!

Another amazing healing happened for me many years ago when my ex playfully jumped on the bed on top of me with our big dog to wake me up. Wake up I did, with a shooting pain in my toes that were bent backwards, accompanied by that terrible cracking sound that usually accompanies a broken bone.

I was sobbing with pain, and curled up to place my hands on my foot. Though I didn’t get x-rays, I have had a break before and this sure seemed broken. I closed my eyes to administer Reiki healing energy and within a few moments, I felt like someone turned on the lights, as a huge radiance filled the room. At that I went into an altered state I guess, as I couldn’t recall how long I lost normal awareness. But when I awoke, the pain was nearly gone, and I could walk on the foot. It all took about 20 minutes tops.

And this is not just my experience as a long time healer, as this was more than 20 years ago. A very similar spontaneous healing also happened with one of my Reiki students. She stumbled and cracked her foot against something in a darkened hallway, and she was sure her foot was broken. As she bent down to tend to the pain with Reiki she said a huge light entered the hallway, she fell into a sort of trance state, and in a short time the pain was totally gone. She could walk normally on her foot immediately afterward.

The first time I heard of such dramatic physical healings, was during the initial Reiki class I attended. Our teacher told about a time when she was walking on the ashram path, and a woman had fallen and had a compound fracture of her leg, which means that the bone broke through the skin. Three Reiki practitioners happened to be near, and spent the time awaiting the ambulance administering healing.  By the time she arrived at the hospital the bone had reset itself! The doctor, looking at the x-rays, asked which one of the women had reset the fracture? They all just smiled knowingly.

These physical healings are just a sampling of the awesome outcomes that are commonplace as we bust open the possibility paradigms of our true potential. They alone would be enough to motivate me after nearly 30 years to continually deepen my commitment to facilitate as many of you as possible to cultivate these higher consciousness states, raise your vibrational frequency so you feel more fulfilled and happy, and initiate students into Reiki healing arts.

And yet, there is also so much more….