Have you noticed there seems to be a widening gap between positive and negative experiences recently?  If I am in cooperation and collaboration mode, everything runs so smoothly, even magically.

The converse is also glaringly evident; when I am pushing my agenda, without sharing my goals and vision, I meet increasing resistance. The old paradigms of competition and “us v. them” are crumbling rapidly as the new paradigms of cooperation and collaboration are shining forth in ever expanding possibilities.

Just like communicating on deeper levels with animals is possible, it is also possible to communicate cooperatively with plants and trees. The energy of cooperation has far-reaching implications. For example, I was trying to move a clump of curly fern once that was encroaching into the pavement. I couldn’t even get the shovel in the dirt as the roots were so entangled. 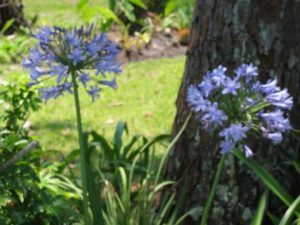 Then I checked my energy, and I remembered that I had not stopped to share my vision with the fern. So I outlined why I wished to dig it up and move it, and excitedly shared my idea that the fern would be a lovely addition to a new garden I was creating.  In the new garden it would be a central and unique plant, with plenty of room to grow. Further I explained that I would like to split the current clump into two sections so it could divide and have many “fern babies”.

Not only did my shovel go instantly into the ground then, but the tightly root-bound fern came apart into two sections so easily in my hands I didn’t even have to cut it or apply force!

Slowing Down and Entering the Silence

In another instance, I figured out a new theme for a problem area that had long “stumped” me; at the base of an old pine tree, nearly nothing would grow and it always looked shabby and unkempt. Furthermore I could barely plant anything because the roots of these native Florida pines are very sensitive and you can kill the whole tree with an ill-placed shovel cut.

But this time was totally different. I was taking my time and listening deeply.   And the miracles unfolded.

I approached the pine bed, and began to lay out the new plants where I thought they would go. And then I “tuned in” and asked for guidance, opening to other possibilities.

Now I could totally feel exactly where the plants were meant to be! Sometimes my shovel would be adjusted a millimeter one way or another, making all the difference between getting the plants in easily versus not at all.  Like the parting of the red sea, the innumerable tree roots and hard ground was giving way like soft butter to the intrusion of my shovel.

This was a garden I have worked on for five years now, and it was always a nightmare to get even an inch or two down without hitting roots. Unyielding would be an accurate description. Yet this time, my shovel glided to exactly the sweet spot, but often not where I originally planned.

As I listened, the shovel felt guided, often weaving its way among myriad thick existing roots without harming any. Navigating seamlessly around the tangled webs I was able to tuck each plant in with great ease. I could feel the pine tree was not just allowing me to plant, but totally happy about it and assisting me.

At one point I actually received the strong emotion that the pine tree was thrilled with all the added attention and the extra hand watering I was giving it, so it was now fully cooperating with my planting.

I contemplated how many times I formulated my own ideas about the best way to do something, and then tried to “push” my agenda or point of view onto someone or something, assuming that was the only way to be heard, the best way to succeed and accomplish my goals. The pine tree was showing me a better way: Conscious Collaboration.