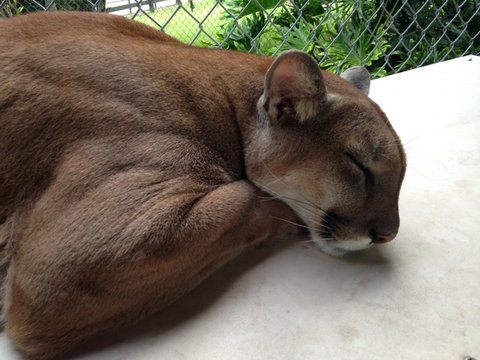 (excerpt from my book)

Last month I had one of the most rewarding experiences of my life…I got to visit a very healthy and happy cougar that I had to extreme privilege to help when she was at death’s door a few years ago. While it may seem a stretch for some that animals may become suicidal, it is unfortunately not the first time this has come up in my communications with despondent creatures of all kinds.

I received a desperate call from Judy Berens of Panther Ridge Conservation Center, hoping for some guidance with a new and very sick cougar named Brandy who hadn’t eaten or drank in eight days, and wondering if she was wanting any more interventions to save her life.

Judy filled me in with this basic background:

“We rescued her on June 1, 2013 from another facility in Florida. June 1st was the last day that the owner had possession of the property, and if no one took Brandy and Audrey – a 19 year old Florida panther, they were both going to be shot.

Both of the cats were on their last nerve – we did not think that the old girl would make it through the night. They were shaking with fear – possibly thinking that Panther Ridge was where they would meet their end. They did not come out of their den boxes for several days. I would go into their enclosures and sit near the den box, meditate, talk to them in a soft voice and send Reiki. These were cats that had not been handled in 19 years for Audrey and 5 years for Brandy (who had already been abandoned by her original human family). 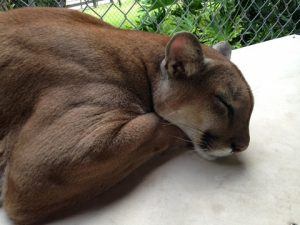 As usual, everyone thought I was nuts.

After about 3 days there was interest in food – they were curious about their new surroundings, and we progressed with bringing them back to health. Then the fighting began. Brandy was terribly intimidated by Audrey, who only had to look at her to send her into a screaming, slapping fit. This continued to escalate to the point where Brandy began to be hostile and aggressive to me…….not acceptable.

The decision was made to separate the two cougars, and relocate Brandy to CJ cougar’s old habitat. We thought she would be happy to have her own space, without being hassled by Audrey through the fence. WRONG………She went into a tailspin of despondency – not eating or drinking or leaving the den box…….day after day after day……she declined physically and emotionally.

We knocked her out every other day and administered fluids, but her eyes were expressionless, and her body was weak from no food. Eight days in all without eating or drinking! We finally took her to the vet where they took blood and x – rays. Incredibly the x – rays showed that she had a tiny deformed liver, and both of the vets thought that she was on her way out.

I was beside myself with frustration and guilt, that I had caused this by moving her. She would surely die without an extraordinary intervention. I need to know if that is what she wants.”

I called Judy shortly after receiving her message. Judy wanted to know if Brandy was choosing to leave and if she should stop trying to administer fluids. When I realized it was a new cougar, and she was in CJs old enclosure I of course invoked his help to persuade Brandy that there may be some good reasons for sticking around at Panther Ridge. (Note: CJ was an extraordinary advanced being in cougar fur who I had deep connections with, but that’s another story).

When I connected to Brandy telepathically, I felt the incredible listless energy and deeply sad emotions. Brandy was telling me she was done and hated her life, but I was not convinced it was her time. She felt completely despondent and hopeless, but there was no certainty in her that she was complete. Something was missing, and in these cases I knew that I had to dig deep to find the answers.

I spent about an hour and a half with Judy on the phone, while she was in Brandy’s enclosure. I was present with the deepest despair while Brandy let me feel her pain of abandonment, and Judy confirmed she had a human family that had dropped her off when she became full grown and feisty, which happens all too frequently with exotics. People think it is cool to own them, and don’t take into consideration how unmanageable they can become as they mature.

After being hand raised in someone’s house, Brandy was dumped at the previous facility which was more like a prison than a home, with no human interaction. The deepest sadness I witness from wild animals is this human abandonment, which leaves them between the two worlds, fitting into neither. They just can’t comprehend what made the humans suddenly drop them or stop caring for them, and they have grown to depend on that emotional support and personal care and tenderness. Whoever thinks animals can’t feel emotions should just hang out with one of these poor rejected creatures.

So at first I just spoke her pain, allowing myself to feel it. Waves and waves of the deepest depression flowed through me. As an incredibly sensitive emotional empath, this level of unexpressed pain used to totally drown me at times. But I have learned to expand beyond the limits of the body in these times, as if I become the whole Cosmos, my heart expands to feel both the sharp stabbing pain of the animal’s past, yet I am holding it in this cosmic container, and like a drop of acid in an ocean of love, it quickly disperses.

I asked Brandy what happened with her family, and she showed me that she had become very feisty. She had scared them as she began to mature and test her powerful form. Without judging, I explained to her how the normal cougar behaviors had become unmanageable for her family, and how humans had to sometimes make very difficult choices. I also told her how sorry I was that the facility that took her was so callous to her needs, but that they too may have been afraid of her due to her sassy reputation.

Often I find that if I explain the human fears and the different perspectives on the decisions that were made, and the behavior that contributed to it, the emotions begin to settle down. Most animals have a very difficult time understanding how afraid and fragile we humans can be, as they usually see themselves as less empowered as humans control the food, the shelter, the exercise etc. It is illuminating for them to have someone explain things in a way they can grasp it, kind of like walking a mile in their moccasins first, then asking them to walk in the human moccasins. This usually takes a lot of the sting out of the hurt and misunderstood feelings.

Then I acknowledged with Judy’s confirmation, that her former facility was pretty depressing and no one could blame her for not wanting to be captive there. But I also pointed out that she is no longer there, that she miraculously landed in the best big cat sanctuary I know of where all the cats are treated like royalty, respected and loved in beautiful surroundings. And I suggested that she doesn’t just take my word for it; but to check it out for yourself.

Also I have learned that much of our energy can be stuck in an old reality especially if there is trauma. So I did some healing to bring her energy back into the present. This is a key piece to bringing several animals come back from the brink after vets have declared them to be dying.

Once I felt that she was collecting more of her life force in present time, rather than fixating on the trauma of the old scenario, I invited her again to check out her new surroundings and see for herself if the cats were happy and healthy. At this, Judy was blown away to report that she actually dragged her totally weakened body up for the first time in days, and jumped onto the top of her den and began to look all around, just as I suggested! Her legs were shaking she was so weak, but she continued to check out first the 3 acre cheetah enclosure. She asked if she could go there someday; and Judy said yes, actually we can put Charlie in the smaller part and she could run and play out there. Then she turned and checked out the next cages, looking intently interested.

Feeling like we just had a huge breakthrough, I asked Brandy if she would show us she was planning to stay by eating something and more importantly, drinking some water so she could become stronger and not need fluids. Judy offered her a small portion by hand, and Brandy immediately ate the food! Next she drank water for the first time in 8 days!

We both felt she was turning the corner, but the next day would surely tell. I closed asking Judy to continue to offer small bits of food by hand often. And we both asked CJ to help her understand what is possible at Panther Ridge, in a cougar body no less!!

The following day, Aug 23, 2013: I received this most amazing email from Judy: 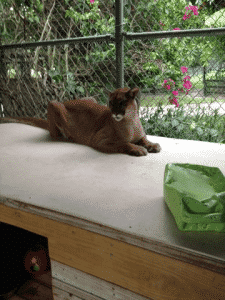 Kumari, you are a Miracle Worker!!!!! Yesterday, she ate well for me – by hand – and got all of her meds for nausea and motility/ That night she had a big bowel movement, which must have given her a great deal of relief. I have been giving her small meals 2 or 3 times a day.

This morning she was waiting for me at the door of the den box and she was really ready to eat. She looked around for a while – took in all of her neighbors and then retreated to nap, but lay down with her hind paws in my lap.

I believe that she is choosing to stay amongst us -she also drank a good amount of water.

I will take some photos and send them on to you. I am sorry that I did not photograph her when she was at her most despondent, but I didn’t want to dishonor her with images of a failing spirit. I shall try to snap a few tomorrow. I am giddy with joy…..and I think she is, too. What an amazing transformation!!!!

I will be thanking you forever…. Judy

I burst into tears of the greatest gratitude and joy. I know for a fact that this would not have been possible without someone as open and receptive and caring as Judy. Judy, keep up the amazing work!! And CJ…I will be thanking YOU forever. 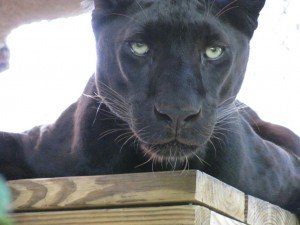 Join me for my Animal Communication Retreat

May 6th & 7th at Panther Ridge in Wellington, FL