Energy Healing and the Sacred Art of Transmission (Part 2)

In my last article I wrote about the ability to transmit healing and intuitive energy and spiritual awakenings through look, touch, voice, thought or even mere presence. The two meditation masters I lived with were exceptional generators of spiritual energy or “Shakti” and I came to expect this direct transmission of the deeper states of consciousness both of my teachers and ultimately of myself. 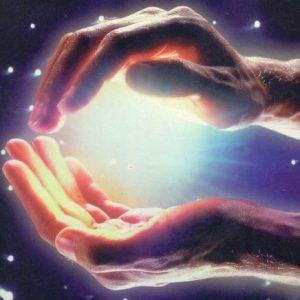 Reiki is also taught mainly through initiatory attunements or transmissions from the Master to the student. So I was initially surprised as I have since met many quite prominent spiritual and meditation teachers, healers, intuitives, psychics and channels who were perhaps quite advanced in their teaching abilities, yet were not endowed with this gift of direct “transmission.” I felt a bit cheated, and wondered why no one was noticing. Then it hit me that perhaps they just don’t know what to expect, or what is possible.

For me, energy healing and meditation was not so much something that was “taught” but a space that was held and palpably demonstrated, like the difference between traveling with a tour guide pointing the way, and moving to a foreign land with a native showing you how to live there.

In my spiritual lineage, Bhagawan Nityananda, a great Indian avatar, barely spoke, but people came from all over the world to sit in his divine Presence and absorb his cavernous depth. He didn’t talk about higher consciousness, he transported you there.

Shortly after my father succumbed to lung cancer in 1988, I went to a gathering where a spiritual teacher from India was chanting in Sanskrit on a video. I couldn’t understand a word and started to become frustrated. But every time her eyes met the camera, I got butterflies in my stomach, like when you are in grade school and the boy you like passes you a special note. It was the same when I met her in person. Being near her, I felt tingly all over.

Within a few months I attended an intensive, where the guru bestows the blessing of “Shaktipat”— awakening the dormant spiritual energy “coiled like a serpent at the base of the spine”. They described many different ways this could happen, but nothing did at first. Except that I felt giddy in love.

I went back to Washington, DC where I practiced law and entered a kind of lucid dreaming state. “Then I saw her face….and I’m a Believer!” A beam of light came from between her brow, or Third Eye chakra representing the inner vision, and zapped me in the same place between the brows, and I slipped into the deepest meditation, remembering nothing else.

When I awoke hours later, I felt entirely different, like my whole life had changed in that split second transmission. I felt brand new, totally alive, and beyond excited about what else was possible on this path I just discovered. It was akin to discovering the world not only wasn’t flat, but it wasn’t the only world! This was a classic Shaktipat spiritual awakening through the guru’s transmission.

While I certainly do not believe, like some, that you must have a guru to get you into direct connection with Source, I can tell you it can be enormously helpful, beautiful and powerful way to shave off years, or lifetimes of struggling on your own. Being in the presence of a great “transmitter” can get you to drop the incessant chatter of the ego mind, and hold the space for you to more easily enter into deeper meditation and pure absorption of higher states of consciousness where healing and crystal clarity reign.

Perhaps because I sat for so many years with true Masters, who were skilled “Shakti” generators, just sitting with them, meditating, chanting was totally transcendent each and every time. Their look, gaze, even their environments held such grace and power. Even photos could send you into bliss!

Ask and Intend to Give and Receive the Highest Transmissions

When I was offered to write the foreword for the book “Journey to Joy”, I asked that my words be a direct transmission of joy to all who read it. And a wondrous thing happened; my beloved Jesus (Yeshua) appeared before me and I could see and touch his face; something that I have desperately desired for a very long time. And it got even better — He stepped forward and merged into my body, while saying: You now can share the “Full Anointing”. Blissful hardly captures what has ensued.

So I am “throwing down the gauntlet” (aka making a challenge) to all energy healers, spiritual teachers, or intuitives to bump it all up a notch, and intend to transmit the power of the healing, meditation, or intuitive energy through your voice, your eyes, your touch, through all of your being.

For all of you who are also seekers, I encourage you to demand that of your teachers and ask for direct downloads of the highest energetic transmissions, knowledge and wisdom, for now that you know what is possible, your longing can be the catalyst to bring it forth!

And finally, please share YOUR experiences of both giving and receiving energy transmissions so that others will be uplifted and inspired to venture down this path less traveled, as I was.