Beyond Intentions: Embodying Your Co-Creative Power

While becoming consciously aware of your thoughts and beliefs, and re-choosing and re-focusing them through intentions are extremely important, there is an even higher state of manifesting, or consciously co-creating your reality. Evolutionarily speaking, this is an advanced concept, and even more challenging to maintain. Otherwise, we would all simply just do it. 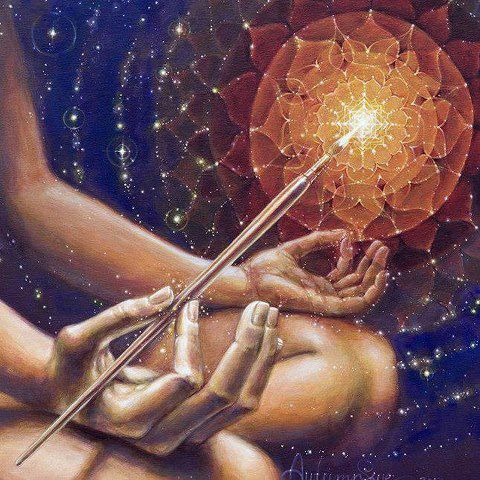 Embodiment. I love this word as it captures so much of what, and perhaps, more significantly, how, the great spiritual Masters have taught vibrationally. Just as the character in the Peanuts comic strip “Pig-Pen” was always accompanied by a cloud of dust all around him, we carry our state of consciousness all around us too. Our “cloak of consciousness” envelopes us, affecting our environment and all those we encounter. For example, personally as I focus on being surrounded by beautiful gardens with hummingbirds and butterflies, I am noticing everywhere I go seems to include lots of them.

As you begin to accept your role as a co-creator of your experience and your world, you also realize how important it is to hang out with like-minded higher frequency folks who are also consciously creating for added support. Then it becomes easier and quicker to shift our realities to include more harmony, abundance and joy.

Manifesting Meccas: Advanced Play in Airports
One of our favorite manifesting venues lately is in airports. Airline travel is a great practice ground for testing out your manifesting muscles as so many things seem to go awry.

On our trip home from Panama City, we encountered several gate changes as our flight to Miami was delayed. We were checking in at a desk to find out where the new gate was and we met a young woman who was distressed she was missing her connecting flight. We walked together to the new gate, and discovered she asked for an outgoing flight on another airline so she would not have to stay overnight in the airport. They refused. They also returned her luggage as it was overweight. Understandably, she was feeling exhausted and defeated.

So we shared how we manifested two seats (together no less!) on a new flight to Germany when we missed our connection, and were told by three airline personnel there was no other flight to Germany that night! I shared that this is what I was teaching in our Quantum Creating course in Panama, and she got excited as she said her mom was a Reiki Master and she believed in the power of manifesting.

In less than 10 minutes, I explained how we held the space of “knowing” that anything is possible, and no matter what people responded, we held tight to our vision of things working out.

Then I coached her on what to say, and I even directed her intuitively to the gate desk that felt best to approach. But perhaps the most important part was this: I anchored in to the co-creative power within me, and I consciously held that energy for her too. I asked her to ground into her power, and her knowing of what is possible, and waited until I felt her energy shift and her empowerment strengthen. When she clicked into it, it was to me a palpable shift. Some may call it a “transmission” of sorts, yet I know I was embodying the possibility and holding the vibrational door open for her to do the same.

A few minutes later she came running over excitedly: “I spoke to a man at the desk you suggested and at first he reiterated that they couldn’t put me on another airline. But I kept talking and visioning the outcome I wanted, just like you said, and a funny thing happened; he noticed my name was the same as his boss; and a few moments later she appeared at the gate! He asked her to help me as I was her namesake; and it turns out she was a former manager of the other airline! So she hooked me up with a friend of hers, who came to the gate to “personally handle me getting on another flight; he even offered to hand carry my heavy luggage for me! I am SO grateful, and I totally know that you helped me create this! And you reignited my belief in my own manifesting abilities.”

There were hundreds of people in the same predicament missing their connections too, yet they didn’t get offered another flight out. So what was it that actually happened here?

1) Clear outcome in mind
She had a very clear idea of what she wanted to happen. Even though she didn’t know “how” it would happen, she knew it “could”.

2) Re-connected to Co-Creative Power
Even though she momentarily lost hope and felt defeated, deep down she did believe in the possibility of things working out quite differently for her. She knew in her heart that we all have enormous untapped co-creator abilities.

3) Energetic Embodiment
I came along and helped to “hold the space” of knowing that her certainty and persistence in re-envisioning the situation was not just possible, but that I had done the same things many times. Like Pig-Pen’s cloud of dust follows him everywhere, the strength of my knowing and vibrational embodiment of our co-creative energy and potential is also very tangible, and makes it way easier for another to step into their own knowing and power as a magical manifestor.

Or as “Abraham” via Esther Hicks would say, we got “into the Vortex” where you rendezvous with everything you have been seeking. I merely assisted her to remember and reestablish her connection with the Eternal, Non-Physical Source that she is.

So if you are not yet “embodying” your full Co-Creative power, I encourage you to hang out often with those who will hold the door firmly open for you, until you fully remember and reconnect and embody your divine birthright as the powerful Co-Creator that you are!