BEING PEACE: Can Your Meditation really Change the World?

Many of us are really struggling, yet again, with the latest Russian Ukrainian conflict.

While it may seem we are quite powerless to change the outer circumstances, I now know there is always something I CAN do: shift my energy, mind, and even my breathing to more calm, centered presence.

You may wonder how does that matter to those who are halfway around the world in dire conditions?

You have likely heard the phrase: BE PEACE. It sounds good, but what does it really mean? Can spiritual practices like meditation and mantra really affect positive changes, especially in the face of violence?

Quantum scientists share that the universal or quantum field is like a mirror, reflecting whatever is projected onto it. Our energy, the sum total of our thoughts, feelings and overall level of consciousness, is amplified and reflected back. Very simply stated, we are either adding our love, or our fear to the universal mirror.

Your power always lies within to transmute energy. And everything is energy at its core, and all energy is connected. You can always take a deeper breath, change your mind, put your attention on something beautiful, and reframe a particular circumstance. If you can shift your attention, you can move energy. Moving energy transforms not only you, but has powerful ripple effects for everyone.

How a Mantra Stopped a Physical Assault

Many years ago, shortly after meeting my guru, I moved to the ashram with my (now ex) husband. One day very uncharacteristically, he went ballistic. As I tried to escape the house, he grabbed me and threw me down onto the couch, pinning me with one hand on my throat, and with the other hand, he broke a bottle, and held the jagged edges to his throat. Admittedly, I was in total panic, as blood began to trickle down his neck I knew he was seriously out of control. By grace alone, I was able to repeat the spiritual mantra my teacher gave us, and as I squeaked it out loud once, twice, then the third time, miraculously he let go of me and the bottle, and left me alone.

Not long after, my guru gathered us all spontaneously during lunchtime, and asked what should we do about the latest US aggression as we started bombing a foreign country. Many raised their hands, but I was chosen from the back of the room of thousands of people to come up front and speak (my worst nightmare). My mind was completely blank, except for this horrific personal attack that I had yet to tell anyone about. So I shared about how the mantra had averted personal violent encounter, and she was quite pleased.

Do you know about the experiment with a group of transcendental meditators in Washington D.C.? They collectively focused on increasing their own mental and emotional harmony, with the goal of reducing violent crime in the nation’s capital.

In turn, this decreased the total psychological stress in the area. But what’s most striking is the real-world effect that had: The crime rate in Washington D.C. actually went down notably by 23.6% during the first 4 weeks of the experiment!

Nobody really did anything to elicit this effect but meditate and work on their own mental and emotional harmony.

A NY Times article from 1993 shared: “By focusing their electromagnetic brain waves in Washington, the disciples of the Maharishi Mahesh Yogi say, they hope to reduce homicide, assault and theft by at least 20 percent. “Preliminary statistics” from the group say violent crime dropped 23.6 percent in the first four weeks. Mr. Prohs, chairman of the Long Island Capital of the Age of Enlightenment in Northport, said meditation could reduce violence by creating “a powerful influence on the larger level of consciousness.” 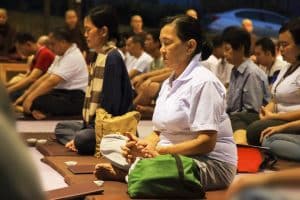 But the effects went far beyond the reduction of violent crimes. Other improvements noted by the World Peace Through Meditation Group during the experiment included:

Do you see how impactful your meditation can be, and how POWERFUL it is when we come together for spiritual and healing practices?

Please accept My Gift to you (and in turn, humanity)

Enjoy this free audio: Connecting with All Life Meditation