Animal Communication: How a Lame Horse Tries to Stop a Suicide

Years ago, I had no clue of the depth of the Soul level awareness that animals demonstrated, or even that I was receiving the messages on this higher plane. Animal consciousness continues to surprise and delight me, and has prepared me to share our profound inter-connectedness, and given me the courage to trust the messages I received no matter how crazy they sounded. The animal kingdom has demonstrated unequivocally that consciousness has no limits, and that the information I was receiving was not just important, it was life-saving at times.

Awhile back I received a call from a woman who sounded quite distressed. Overnight her horse couldn’t walk and she was torn what to do as she had very little money. After we spoke, she said she already felt better, and that I must be the angel she had prayed for. 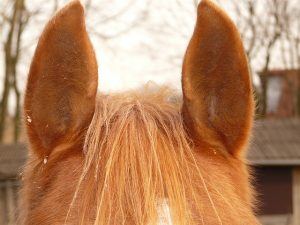 I drove to a nearby farm where she boarded her little bay mare. Her horse shared a lean-to with two other congenial and rambunctious companions… a heifer and a young bull. The cows performed many antics to grab my attention, but the mare was less than enthusiastic.

I soon saw why — her right front leg was totally stiff from the shoulder down, as if she just came out of a cast up to her armpit. She could barely maneuver around the shed to face me. I have been around horses most of my life, yet I could not recall any lameness this extreme, especially with no apparent traumatic incident.

I rubbed in some therapeutic essential oils for pain and stiffness as I applied Reiki energy to the leg, yet for twenty minutes nothing shifted, which is quite unusual with this powerful combination treatment. I couldn’t seem to get a “word” out of her to boot.

Nearing the end of the session, still with no results, I asked once more if the mare can enlighten us about the cause of the lameness. “You know… she is trying to kill herself.” As I was still fairly new at animal communication I recall wondering, “Did I really ‘hear’ this from the mare???” My own doubt was just the first hurdle I had to get over.

While it can be challenging to prepare someone for the strange array of comments I may receive from animals, try working that into a sentence! “Oh, by the way, your horse says you are suicidal, and that is why her leg is stiff as a board.” Or — tackier still — “Your horse is ‘off’ (a term meaning lame in the horse world) because you plan to ‘off’ yourself!”

Panicking a bit at the lack of options, I actually contemplated not saying it — I don’t have to share everything, do I? Perhaps I misunderstood, or made something wild up. I got no further assistance from this unassuming little mare — not another word, thought or image that would give me a way out. She did however; move a little easier now, a slight bend in her knee that wasn’t there before that stark communication.

As I finished the energy healing treatment, I tried to figure out a “natural” segue way for this startling revelation about the owner, and how to explain that her suicide plan was connected to the instant lameness. I asked her general questions about how she was doing, and as she drove back onto the main road, she offered that she had actually wanted to kill herself! I used that confession to slip in, “I know… your horse told me!” waiting for the expected disbelief. But the woman just kept driving, saying it didn’t surprise her!

She had it all figured out — she was going to hitch up her trailer and drive herself, her horse and her dog off a bridge. She planned to take the animals with her because she was afraid that they would starve. However deranged her thinking was, I could actually feel the compassion in her decision.

In my years as a family counselor, I knew that anyone who had a suicide plan worked out was quite serious, so I pressed on… “Are you still planning to do this?” She brightened a bit, “Oh, no, a few months ago I was determined, but I begged God to do it for me, and since God didn’t take me, I figured He had a plan for me. I decided to apply to get my old job back as a crane operator. I loved that job; good money too. I have been unable to find work in Florida, and have struggled to keep my animals fed, but they were always fed, even if I had nothing.”

Relieved that she was no longer planning to take her life, I asked her to please tell her mare that triple suicide was no longer her plan! Clearly the poor horse was very worried and somehow, the mare’s higher intelligence manifested this trauma to make sure that someone came out to check on her person as the woman lived a hermit-like existence. I marveled at the practicality of the “solution” as it prevented the mare from going anywhere, especially into a trailer with an unbending limb!

Still a bit shaken by all this, I continued on to my next appointment… a young male German shepherd who kept attacking a sweet gray gelding. The woman with the lame mare came back to tell me that she visited her little bay again, and followed my advice to clarify that she no longer planned to drive her “family” over the bridge. Delighted, she reported that her horse was now moving with 50% more flexibility than a half hour ago!

A few days later, I heard the woman got her old crane operator job back and moved out of state — the best scenario I could have hoped for her and her animal family!

While this all sounds extraordinary, it is not uncommon for animals (and people too) to manifest extreme conditions to bring more awareness to an emotional imbalance either with them or someone close to them. Once brought to light through animal communication and energy healing, the need for the physical condition or odd behavior is released at the causal level and quickly diminishes or often completely resolves.