How Animal Communication got a Lame Horse to do … YOGA?? 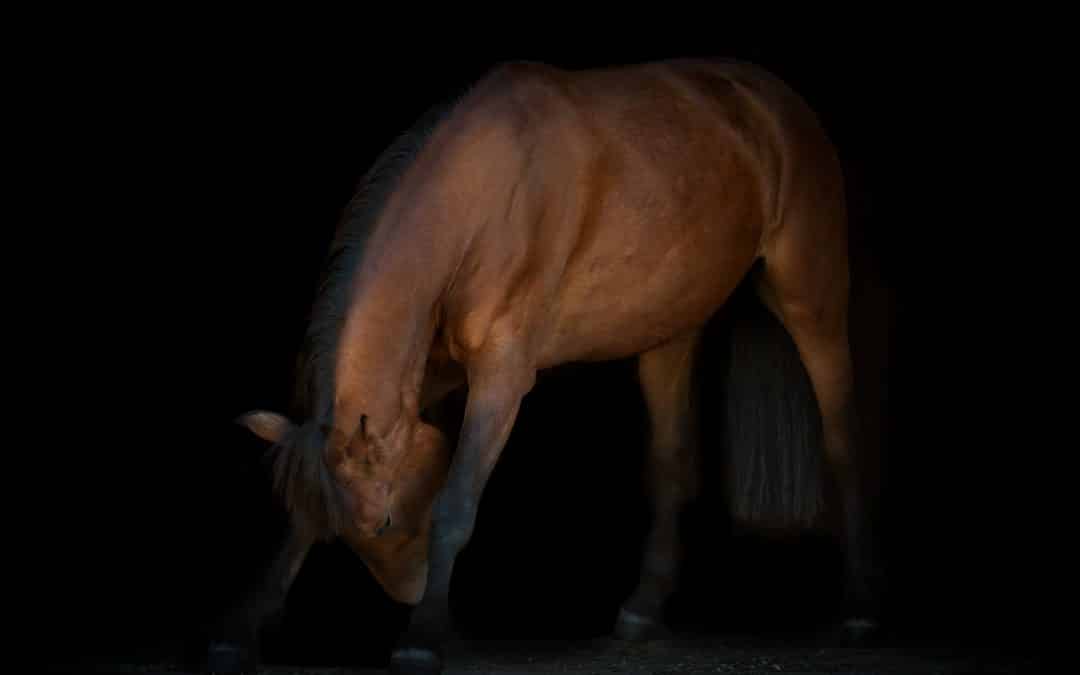 As a Reiki Master Teacher, Intuitive Coach and Soul-level animal communicator for over two decades, you may think nothing surprises me as I regularly experience truly remarkable healings and results that many people might call “miracles”.  Yet I still can be delightfully awe-struck, I will share in the following case study.

When the owner first contacted me by phone, she was very skeptical about animal communication and energy healing in general; and understandably had sincere doubts of the effectiveness over the phone.  She wanted help understanding what her gelding was feeling and how to help him.  She reported that her show horse had been stiff and lame off and on for some time, but gave me limited details to see if my information would be on target.

Describing the Problems from the Horse’s Viewpoint

As usual, I began by sending Reiki energy and indeed began to feel the soreness in his legs.  I continued to send energy to help clear his spine and especially neck that felt very congested and stiff to me, and perhaps was the source of the lameness. The owner concurred that he had limited range of motion in his neck for some time.

I continued to focus on clearing the blocked energy and stiffness in his neck. The owner asked, curious: “Will he tell you what his bad habit is?”  Immediately I received an image of the horse cribbing; an obsessive sucking of air while chewing on the stall door or any available object.  It can be quite destructive to the stall, can stiffen the muscles in the neck, and can lead to other possible problems such as wearing down of teeth, weight loss and colic.

His mood was very agitated. He complained to me that cribbed because he was easily bored, and didn’t like being in the stall so much even though he got very regular daily exercise.  He asked for more outings, even if it was only walking.

Gratefully, when I explained his agitation and boredom in the stall, the owner agreed to hire someone to add another mid-day walk for him.  Now that his needs were heard and an appropriate solution was agreed upon, I shifted to addressing the horse and his behavior directly.

This is where the real fun begins.  Next I suggested that the horse did not have to just stand in the stall and become “bored stiff”.

I am very empathic, which means that I can “feel” another’s emotional feelings and physical sensations in my own body.  With a four legged animal, my arms represent the front legs, so in order to figure out another solution, I stood up and began to stretch my arms and neck in various ways to relieve the tension.  At the same time I described the stretches to the horse, and asked him to practice them with me in his stall.

I have never suggested anything like this before to an animal.  After a few seconds, the owner, who was in the stall while on her cell phone with me, gasped and whispered “If I didn’t see this with my own eyes I never would believe it!  My gelding is doing YOGA in the stall EXACTLY the way you are telling him to do!”

Perhaps even more remarkable than this was the call I received the next week (does it get any better?? Surprisingly even to me, YES).  Gratefully, she reported he seemed much happier and less stiff.  But that wasn’t the big breakthrough for her…

For over a week the owner would sneak up on her horse to secretly observe him in his stall, and marvel that each time she “found him doing the yoga stretches I recommended all by himself!”  While a horse independently doing yoga as I suggested over the phone was truly awe inspiring for us both, her paradigm shift of seeing for herself the higher intelligence and expanded awareness of her horse may have been the real miracle.

I have observed that often the most dramatic displays and healings come for those that really need to “see” or “touch” a miracle.  The animals’ role in the ever unfolding play of consciousness  can seem extraordinary, yet they are so intricately connected to the web of life without the limitations of the ego mind, that they often are more naturally spirit-filled and flowing than many humans.

Finally, never underestimate the power of negotiation even with animals. Once they are truly heard and feel understood and respected, animals can be very open to participating in new behaviors and solutions. Empowering both people and animals with alternative ways to deal with life’s stresses sometimes only takes a loving suggestion.  The possibilities are only limited by our creativity and imagination.